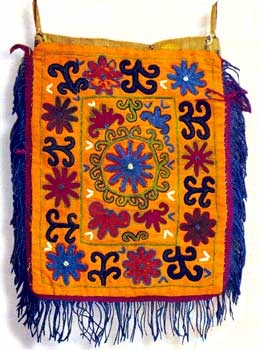 Among various fields of the decorative applied art of Uzbekistan the embroidery occupies a special place. It closely links to the life way, rituals and traditions of the people. Traditions of the embroidery go back to the centuries. Almost each woman was a mistress of needlework. From the childhood girls studied this art. As a rule embroideries were made for home but not for sale. Embroidered pieces were wide used in rituals, what caused their various types. Thus, by the wedding ceremony a young bride should embroider tubeteykas, towels, belt-shawls – belbags, handkerchiefs, a small prayer carpet – djoinamaz and others. The needlewomen filled up each thing with their hopes, wishes and dreams. They used all set of colourful silk threads to create rich and fine ornaments.

There are a lot of embroidery centers in Uzbekistan. Each of them has its own original approach to ornament and colour. One of such centers was a medieval city of Gijduvan in Bukhara region. By the second half of the XIX c. in Gijduvanx and neighboring villages has been formed the embroidery school, close to the Bukhara traditions but differed by interpretation of ornament and colours. Local traditions of folk art played an important role in the formation of decor of the Gijduvan embroidery.

The Gijduvan embroidery, like the Bukhara one, was made in a technique of iyurma (with a hook); for edging was used bigiz – a hook of iron with bended point; in Bukhara this operation was made with a needle. The Gijduvan needlewomen embroidered with special thrown threads, and the Bukhara needlewomen used threads without preliminary throwing. Each center used a specific texture: the Gijduvan embroidery was made on white or slightly grey carbos (cotton cloth of home making), red chintz, white textile and light grey rep, and the Bukhara embroidery was made on more expansive fabrics – white carbos, colourful adras, silk and imported Guissar fabrics.

Compositions of the Gijduvan suzaneh, bedcovers and prayer carpets, were usually of a medallion type; they consist of central field and three-row edging field of one broad strip and two narrow ones. The ornament of a broad strip imitated ornaments of a central field or contained vegetative ornament “islimi”. In two narrow strips there were geometrical motifs islimi, meander, mavj (wave) or sebarg (treflee).

A wealth of flowers, leaves and matted branches creates a symbolic picture of Garden of Eden (“bogi eram”). The needlewomen in their flower patterns reflected their original world vision in all its variety, blossom, the idea of fertility and prosperity. Pictures of birds, animals and even men were not rare for rich decor. Original stylization was typical of them. Various pictures of housewares were also popular. Inscriptions in Tadjik and Uzbek languages as elements of decor were among characteristic features of the Gijduvan embroidery.

Prayer carpets (djoinamaz) imitate compositions of a bedcover based on П-form structure. Sometimes a narrow edging decorated a lower part of djoinamaz. But in any case the most part of such embroidery was not filled up with ornament and remained blank. Natural carbos of white or grey colour has been a main material used in Gijduvan till the XX c. This cloth was often manufactured by needlewomen themselves. Its neutral colour was a good background for patterns. In Gijduvan they often used a colourful cloth for embroidery of suzaneh therefore they seem bright, decorative and rich. In a course of centuries in Gijduvan a special culture of colour and its contrast compositions has been formed.

Blue, light blue, turquoise, grey, orange, brown, deep red, chryso-yellow, green and rose-pink combined with half-tones create colour wealth of the Gijduvan embroidery. The Gijduvan needlewomen called colour in their own dialect: green -pistaki, violet – nofarmon, blue – nilobi, pink – shirchoi, hunter’s pink – gilosi, dark brown – zigari, green -kabuti, black – siey, red – zard, grey – hokistar. Threads were painted with exclusively natural paints. For that a hank was put into the water with solute alum and boiled with natural paint, then it was washed in clean water added with acetum and after that dried up. These painted threads were rewinded in a clew and evened out with a flat stick – “hor-chup”. Such thread was easily passed through the eye of a needle, laid smoothly on a cloth and better caught with a hook. By the beginning of the XX c. Natural paints were substituted by aniline dyes, and the cloth for embroidery (chintz, rep, cottonade and tartan) by manufactory fabrics. Bright colours of aniline dyes, which faded quickly, changed natural soft colours, what caused a down of Gijduvan embroidery art value.

In a case of big embroidery experienced needlewomen made a sketch. They made a pattern on the fabric with natural black paint – rangi siye. For the location of a composition a square cloth was fold up along a diagonal, then was fixed its central point and after that a broad edging, which framed a central field. A central field, as a rule was twice or three times wider than edging. Further a needlewoman marked main ornaments and filled up a blank surface of the field with small elements of ornament.

Preparation of a sketch of each new work required a creative approach. They never copied existing works and didn’t give their sketches to the other needlewomen. It was considered that a speciality of artist was given by the God. Therefore, in spite of stable canons in some composition solutions a free improvisation and creative realization played a role of important factor. Variety of patterns was reached in the account of varying of colours, basic and additional elements of ornament. The Gijduvan embroidery having original and unique interpretation of popular in Uzbekistan compositions has become another bright evidence for creative potential of the Uzbek people. 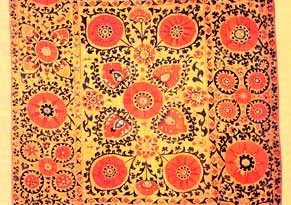 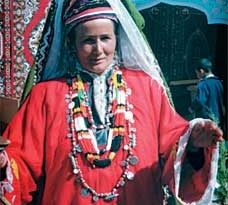 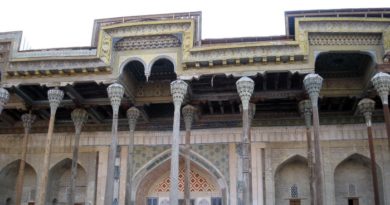