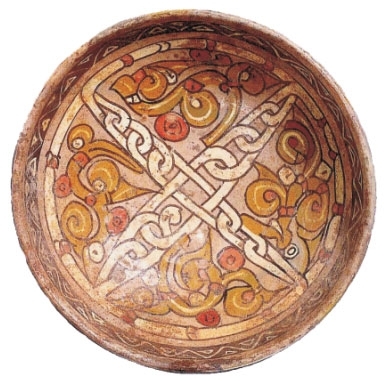 In a number of large collections of Islamic art, which have received world-wide fame thanks to excellent publications, there are glazed bowls that stand out for their specific decor. The most characteristic features of these are a kind of grayish-lilac or pinkish-gray engobe serving as a backdrop for polychrome engobe painting, expressive images including zoomorphic and anthropomorphic images, as well as epigraphic and vegetative-geometric motifs.

Quantitatively, the largest group consists of zoomorphic images. This is a fantastic image of a bird with magnificent plumage, small ears and a strip going from beak to back, fish in which a powerful sturgeon, a leopard with a curved and forked tail, hares whose ears form a triangle in the center of the vessel are guessed. The design of the conical bowl, on which the siren is shown, is absolutely unique, a bird with a female head, on which a strange headdress is worn. She has wide wings and a huge complex tail, next to two white fish. Another unique story is a lunolik beauty with long braids playing on a lute. On a number of vessels there are inscriptions made in the handwriting of a simple, sometimes coarse, Kufi.

Olive, ocher-red, pink, black and white are used in the painting. A characteristic feature of the decor are the space-filling figures in which large black and white (sometimes only white) points are placed on the black background. There are options when the figures are not painted black, but white, and the points are olive. A black band runs along the mouth, imitating a Kufic inscription made with thin white lines. Sometimes a similar band is applied to the bottom of the vessel. In some cases, the band is filled not with a pseudo-script, but with wavy lines, zigzags and triangles.

In the publications of the cup are dated IX-X, X and X-XI centuries. They are interpreted either as products of Eastern Persia or Transoxiana, or Central Asia, or – “East Iranian world.” About two items from the collection of As-Sabah O. Watson writes that they are supposedly from Meimene in Afghanistan.

The unusual and vivid design of the ceramics under consideration, for the description of which the most appropriate definition, perhaps, is the word whimsical, attracts considerable interest of researchers and collectors. But, judging by the literature available to us, there is no certainty in the localization of this group of blood vessels.

It seems to us that two vessels can introduce some clarity into the problem of the origin of this group of ceramics, one of which was found by the author of this article during excavations at the Budrach settlement, and the second one is in the exposition of the Archaeological Museum in Termez.

Budrach hillfort is located in the Denau district of the Surkhandarya region and is probably the ruins of the medieval Chaganiyan, the capital of the same name, occupying the territory along the middle and upper reaches of Surkhandarya. With Chaganiyan (Saganiyan in the Arabian transmission), this ancient settlement was identified with GA Pugachenkova; archaeological studies carried out under the guidance of E. V. Rtveladze, made it possible to clarify the chronology and structure of the city and its districts.

In 1986, 1989 – 1991 years. The Budrach detachment of UzIskE under the guidance of the author of this article led a small excavation in Dunyotepa – a hill located in the southeast corner of the castle of Budrach. Excavation-1 (BDR-1), which was started in 1984 by M. Kh. Iskhakov, occupies the north-western part of Dunyotepa. Here, the remains of 17 rooms dating from the 10th-11th centuries were identified. Excavations, in view of the discontinuation of funding since 1992, were unfortunately not completed, and the results of the excavations remained unpublished.

The most interesting of the finds on Dunyötepa in this context is the fragment of the glazed dish we found on the floor of room 1 in 1986. The dish – with the wall bent in the upper third, on the ring pallet, the diameter of the corolla is 27 cm, the diameter of the pallet is 10 cm, height – 7.4 cm. Outside, the vessel was entirely covered with white engobe, from the inside – a gray-lilac engobe. The latter is also applied outside the vessel with an uneven strip along the corolla and in places it spreads over the white engobe. Transparent colorless glaze covers the bowl completely from the inside, and outside – only in the upper third, also an uneven strip with streaks. The painting on the purple background is made of white, dark olive, ocher-red and manganese-black engobe paints. The decor is a writing inscribed across the dish in the handwriting of a simple Kufi, printed in white; contours and details of letters are made in black. Under the inscription (and, probably, above it) a dark olive color depicts symmetrically arranged plant curls with volute-like endings. Contours and details are black, in addition, ocher-red spots with white specks inside are added. Along the corolla is a black strip with filling in the form of an imitation of a kufic inscription (“barrack”). The background is filled with various figures in which rows of white and red specks come on a black basis, as well as olive circles, delineated with a thin black line, with a black ring and a dot in the center. On the outside of the vessel, along the corolla – three oblique strokes of olive color.

The inscription most likely represents the Arabic word “akhla?” – “character, nature, temper”, with the addition of a decorative “alif” at the end. This word, derived from it – “morality”, “moral”, “morality” – is included in one of the most popular aphorisms on Samanid ceramics: “Al-judu min ahhali ahli l-jannah” – “Generosity – from the souls properties inhabitants of paradise “. This phrase adorns the dish from the collection of Aga Khan, we note also the similarity of handwriting.

The second vessel, which allows localizing the group of ceramics under consideration, is adorned by the exposition of the Archaeological Museum in Termez (cipher: I 13/73, SVAM 3523). This vessel is a one-handed pitcher with a pear-shaped body. It is interesting because, firstly, it is the only evidence that the design of interest to us has decorated not only dishes and bowls, but also dishes of closed form, and secondly, it gives one more binding to the Surkhandarya region. We have not yet succeeded in finding out on which exactly the site of the site the pitcher was found, but there is no doubt that it occurs from one of the archaeological monuments of the Surkhandarya region. The remaining height of the jug is about 14 cm, it has a flat pallet with a diameter of 7 cm. Decor: in the upper part of the vessel on a dark gray background – two red birds leading one by one, with long tail feathers and white paws, their heads, unfortunately, not preserved. In one place the birds are separated by a trefoil of olive color. From the bottom the composition is limited by a black stripe with an imitation of a Kufic inscription made with thin white lines. The background is filled with black figures, inside of which are rows of white and olive flecks.

The Budrach dish features all the most characteristic features of the group of interest to us: a gray-lilac engobe as a background, figures filled with white and red dots, a strip under a whisk with a pseudo-scripture, an inscription with the Kufi handwriting. Olive plant elements and scattered around the background circles from our dish are identical to the decor of the bowl from the collection of As-Sabah.

The decor of the pitcher from the Termez Museum also fully corresponds to the typical characteristics of the group, this also applies to the bizarre appearance of birds.

The only difference is that instead of the red specks, olive dykes are used here.

As indicated above, the datings proposed in various publications fluctuate within the limits of IX – X, X and X – XI centuries. In our opinion, the dating of the X century. – it is most expedient; in favor of this speaks and the fact that on the two vessels known to us are presented completely and correctly written aphorisms, which is not typical for the XI century.

So, two finds from the Surkhandarya region, first published by us, give grounds for expressing an opinion that the region in the south of Uzbekistan could be the place of production of the entire group of unique glazed ceramics with a rare polychrome decor and exotic subjects. It is possible that the workshop (or workshops) in which the production of these products was mastered was located in Chaganyan, the capital center of the same name, which reached its heyday with the Samanids.

The rulers of the Mukhtajid dynasty, who owned Chaganyan, occupied important positions in the Samanid administration and played an important military and political role, which could not help fostering the flowering of culture, art and crafts in their capital. It is not for nothing that the Amirs of this family were patrons of famous poets such as Dakiki and Farrukhi. After the fall of Samanid power, Chaganiyan fell into the sphere of influence of the Ghaznavid state, but he did not lose his importance as a center of crafts. In any case, the largest treasure of bronze ware found in the first half of the eleventh century, found by us in Shuristan, may be indicative of this.
Central Asian ceramics in the collections of the world

There are numerous traces of ceramic production at the Budrach hillfort, but, unfortunately, there have not been any special studies of it yet. Of course, it would be possible to speak with complete certainty about Chaganiyan ceramics production of the group considered here only after the discovery of defective products of this type at Budrak Castle. Unfortunately, there are no such data yet. Central Asian ceramics in the collections of the world.

Of course, it is impossible for one cup, found in Chaganiyan, to confidently judge its local production – it could well have been imported. Nevertheless, even assuming, based on rather obscure indications, the North Afghan origin of objects from Western collections, the territory of the Surkhandarya region of Uzbekistan, or, according to the medieval nomenclature, the territory of north-western Tocharistan, should be included in the area of ​​distribution of the ceramics studied. In any case, this ceramics can already be quite confidently called Tokharistan. If we manage to find new evidence, we can finally solve the problem of localizing this most interesting group of glazed dishes and rightly call it Chaganiyan ceramics. 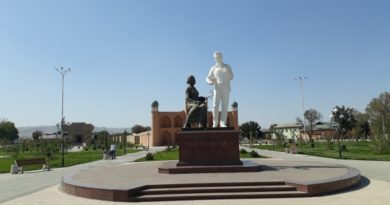 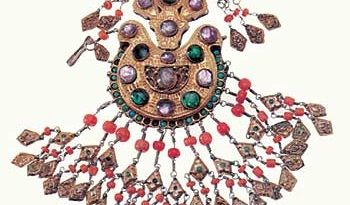